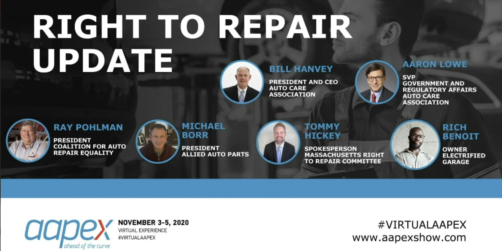 The AAPEX Government Advocacy Town Hall on Nov. 4 celebrated the overwhelming “yes” vote on Massachusetts Right to Repair proposition that will preserve the right of vehicle owners to have access to and control of their vehicle’s mechanical data necessary for service and repair at the shops of their choice.

Bill Hanvey, president and CEO, Auto Care Association, reported from Beacon Hill in Boston, Mass., as he welcomed the virtual Town Hall audience and credited the hard fought win, in large part, to an extensive grassroots effort of 1,600 independent repair shops. He added, “My thanks to the entire industry, and to the Coalition for Auto Repair Equality (CARE), O’Reilly Auto Parts, AutoZone, NAPA and Advance Auto Parts, as well as LKQ, Dorman, the Automotive Warehouse Distributors Association (AWDA) and the Automotive Aftermarket Suppliers Association (AASA).

“We won by 75% to 25%, which is an incredible accomplishment,” said Lowe who has spearheaded the campaign for many years. “Now vehicle manufacturers can come to the table to work with us on how to implement it, as it needs to be done by model year 2022. We want this to be a national effort and take what we did in Massachusetts to benefit the entire nation.”

Read the full story on indiegarage.ca.